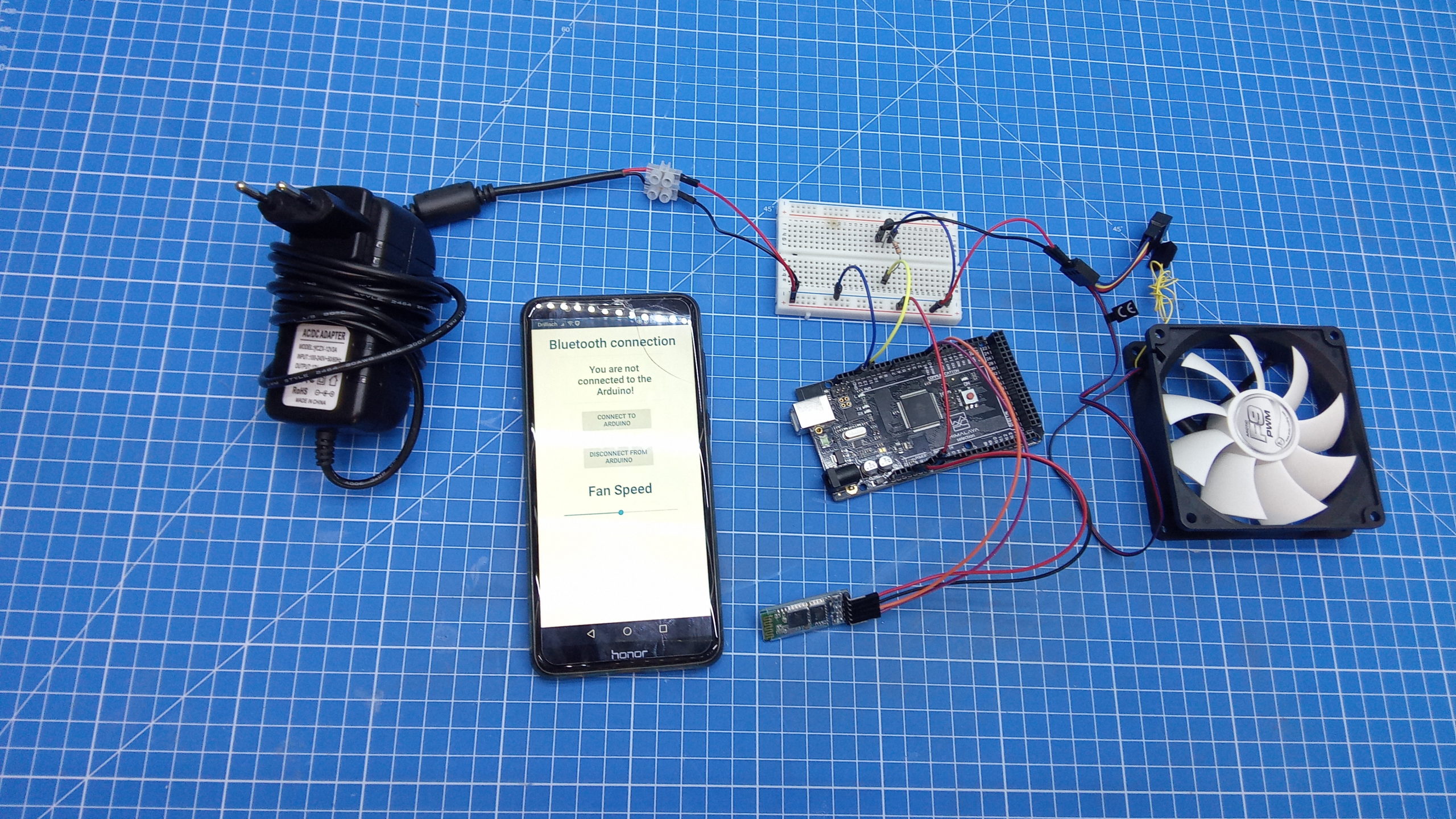 We have already created a post in which we explain how to regulate fans by voltage. It doesn’t matter whether the fan is supplied with 12V or 5V. The number of connections is also unimportant. You only need the + and – of the fan. Now we also want to connect a Bluetooth module to the Arduino and write an app that can be used to change the speed of the fan. So let’s get started with the Android Bluetooth classic App for Arduino. 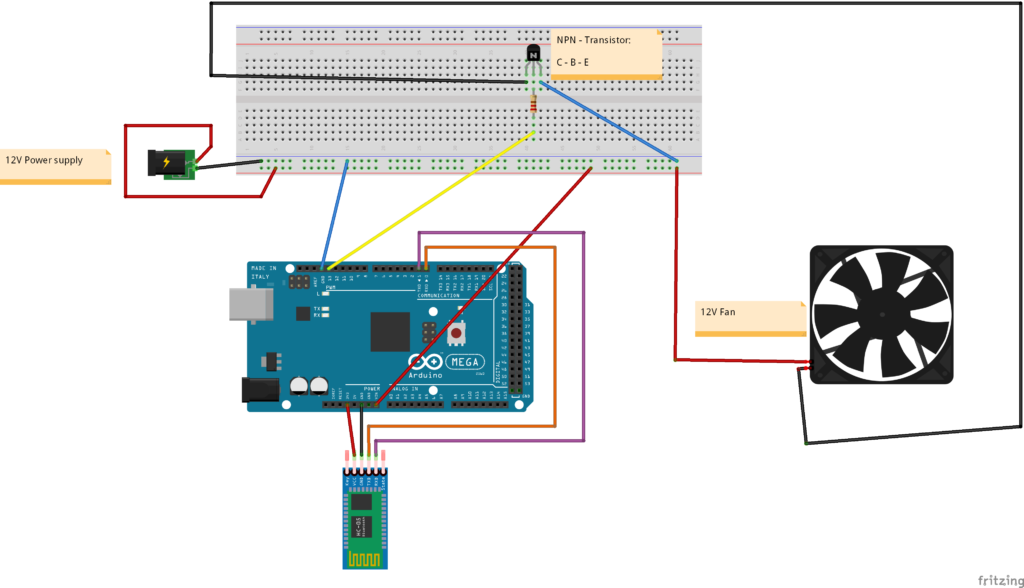 If we would plug the 12V power supply into the socket now. Then our Arduino would already be powered. There is no additional power supply like USB required. The Vin pin of the Arduino automatically regulates the 12V of the power supply to 5V for the Arduino.

Important: While the Arduino code is being flashed on the Arduino, you have to unplug RX and TX. Otherwise the flash process won’t work!

We program a pure Android app with an HC-05 or alternatively HC-06 Bluetooth module. These two are Bluetooth Classic Modules. You can not connect to Bluetooth 4.0 also called Bluetooth Low Energy (BLE). The code for BLE is very different. Below is the programming guide for a Bluetooth Android app build with Xamarin Android. All important files are also uploaded!

As development environment we use Visual Studio (it is free) for the Xamarin.Android app. In AndroidStudio, the process is analogous, but the code will be in Java and not in C#.

Click on “Create new project” and select “Android app (Xamarin)”. At First we add the Bluetooth permissions to the “AndroidManifest.xml” file:

Then we design the layout of the app in the “activity_main.xml” file. We need 2 buttons for “Connect” and “Disconnect” and a slider for speed control. For the slider we set the maximum value to 127 (android: max = “127”).

In “MainActivity.cs” we add “using Android.Bluetooth”, create a “BluetoothConnection” class and set our “activity_main.xml” file as the start page. A Bluetooth socket is created for the connection to the Arduino. We recommend to look at the source code which is attached to this post.

Essentially, we always send a byte to the Arduino. That means we can send numbers between 0 and 255. For the fan control, we take the range from 0 to 127. The Arduino doubles this value and thus regulates the fan, which also runs in a range between 0 and 255. The rest of the range between 128 and 255 can be used for further functions. That’s it, just compile the app and go to the next step!

Incidentally, the code for the app is based on this project here: https://www.instructables.com/id/3-LED-Backlight-Xamarin-and-Arduino-With-HC05/ 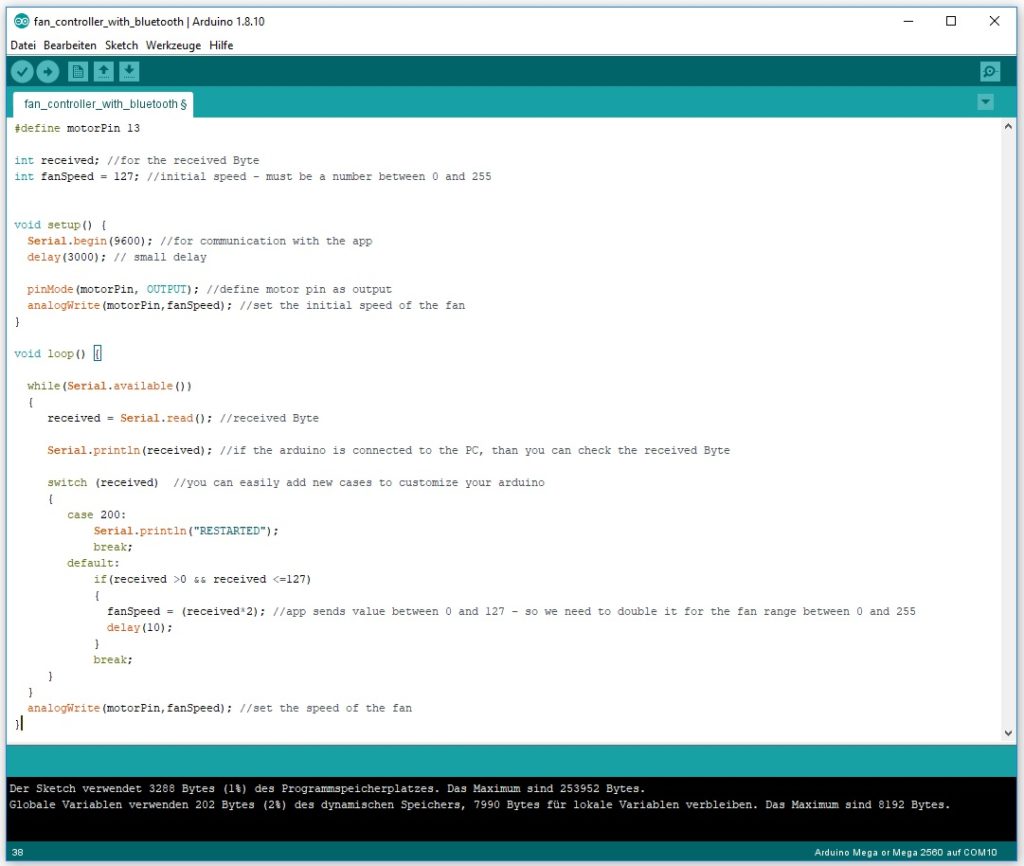 Please do not forget to disconnect the RX and TX wires before flashing the Arduino and afterwards connect it again correctly (RX to TX and TX to RX)!

Since we have connected the base of the transistor to pin 13, we define it as “motorPin”. The fan speed can be controlled via the “fanSpeed” variable. At the beginning, we set “fanSpeed” to half the speed, i.e. 127. (Depending on the fan model, a certain minimum speed is necessary for the fan to start.)

We define a variable “received” in which we store the byte sent from the app. In the setup function we start the communication with “Serial.begin” and set the baud rate to 9600. Then we program a while loop in the loop function. The while loop becomes active whenever a byte is received. If the value of the byte is between 0 and 127, we double it and define it as our new fan speed “fanSpeed”. As soon as the while loop has ended, the new speed for the fan is set with “analogWrite (motorPin, fanSpeed);”

Screenshots of the Android Bluetooth classic App for Arduino

Please note, you have to go to the settings and connect to the Bluetooth module at first. Otherwise you won’t be able to connect to the Arduino with the app! 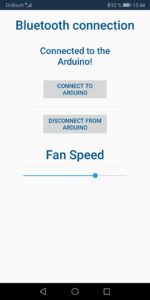 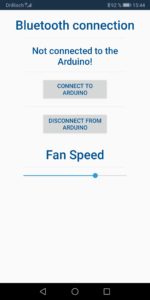 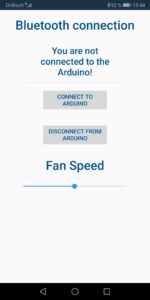 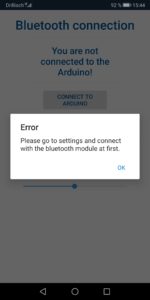 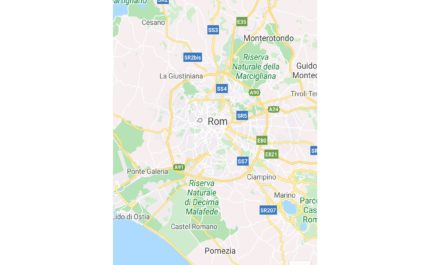 How to integrate Google Maps in an App with Xamarin 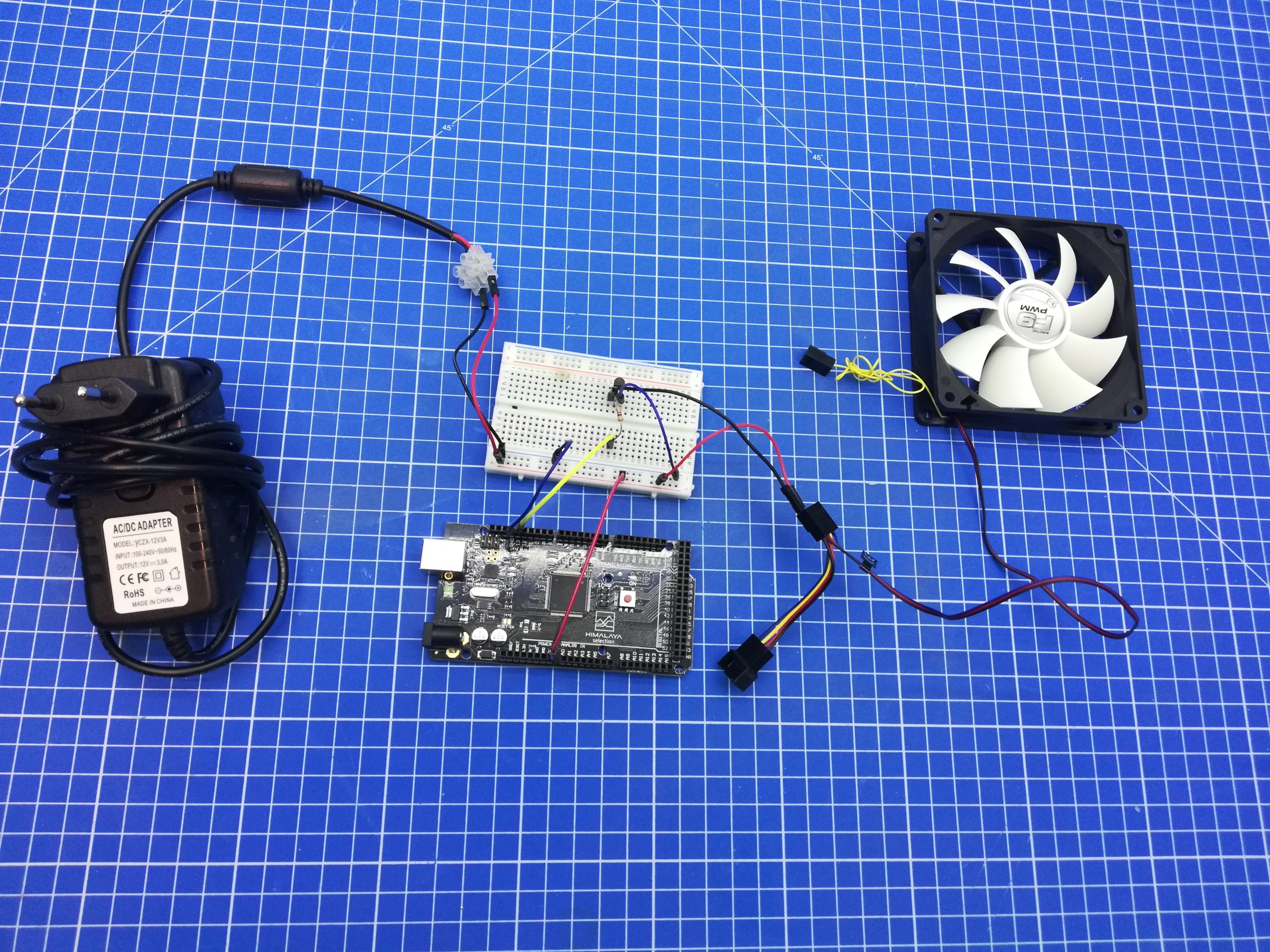